Just finished the Way of the Roses with Peak Tours. Perfect! I am addicted to Peak Tours rides, this was my third. Everything just right - accommodation, food, the tour guides are great, the routes are wonderful, fellow riders great too. Already planning my 4th tour with them - maybe Portugal!

Thoroughly enjoyed - thanks to everyone involved.

Thank you Peak Tours. Another fabulous holiday and I can't wait for the next one.

quite simply stunning and always a lovely atmosphere

Loved, loved, loved it. It was great to be back. Worth the wait (should have been a year ago). The route, the Peak Tours back up. Just fantastic!

I thought this trip was brilliant. It was just the right length and challenge for me.

Had a great time, felt Peak Tours were very trustworthy and professional. The three guides were excellent.

I would recommend PT and will certainly consider other tours with you. It was a very positive experience.

My partner talked me into doing this tour and I'm so glad he did. There were times when I didn't think I would make it to the end on my bike but with encouragement (and plenty of snacks) from the tour leaders and the rest of the group I did it. I would absolutely recommend the tour and would sign up for another one!

This was my first tour - I have never cycled 7 days in a row before... you made it easy and I will join again one of your tours next year I hope (Channel to Med and/or Ireland)

Not cheap, but I would absolutely recommend and clear to see how trip costs are spent (accomm, lunch, snacks, backup, brew etc).

Will be promoting to others and can’t wait to go another Peak Tours trip.

I'd only been on one Peaks tour before which was just 3 days - 7 days is a whole new experience, and lots of fun, but very tiring unpacking and packing every day after a tough cycle (two days in Ullapool was super)

What a week. A perfect get away on 2 wheels. Challenging at times and boy did the scenery make every pedal turn worthwhile. It was a million times better than I thought it would be. 10 out of 10. A big thank you to everyone who made the trip possible.

Spectacular! Any pre-tour covid concerns were soon forgotten. Just need to choose the next one now....

Loved it, and have recommended it to many friends....now hoping to get a place on another PT trip soon...

It was absolutely brilliant. I wouldn’t change a thing. Thank you for another holiday which I’ll remember forever!

Not sure if I'd describe it as a holiday as such. But it was certainly a wonderful EXPERIENCE.

Fourth tour with PT and it won't be the last. You even managed to provide great weather in Scotland - how do you do that?!

Another great holiday with you, looking forward to C2M next summer.

An excellent tour in all respects.

This was a tough ride and a personal challenge, as all great endeavours should be, but the inspiring views, the rapid descents, the banter and the outstanding organisation made for a hugely pleasurable experience. I don’t doubt that I will undertake another cycle tour someday and having completed 3 with yourselves to date, Peak Tours will remain top of my list when that day comes.

Everything - from start to finish - was great.

We had a fantastic time. Thanks to everyone at Peak Tours for all your hard work during what has been an incredibly difficult period. Simply Outstanding.

3rd Peak Tours Tour. I wouldn't keep coming back if I didn't think the overall tours you put together are challenging but achievable. Excellent support. Escellent route. Excellent accomodation.etc. etc

A truly great way to see some fairly, and some extremely, remote locations. It got better as it went along and was great value for money in my opinion

The Peak District National Park was the first national park to be set up in Britain in 1951 and encompasses 542 square miles of protected land. The Peak District can be roughly divided into the High or Dark Peak & the White Peak.

The White Peak of the south encompasses steep sided, wooded limestone gorges & bright green fields, criss-crossed by dry stone walls. There are also many unspoilt & idyllic villages which provide excellent lunch stops en-route. In contrast the Millstone grit of the High Peak provides a much more rugged & remote destination to explore with many reservoirs & lakes which punctuate the landscape.

Much of the region was converted into a hunting ground by the Normans, when the Royal Forest of the Peak was governed from Peveril Castle, above Castleton. Wealth generated from sheep farming & mining is reflected in the many fine historic buildings such as Haddon Hall, Chatsworth house, Eyam Hall & the Crescent at Buxton. 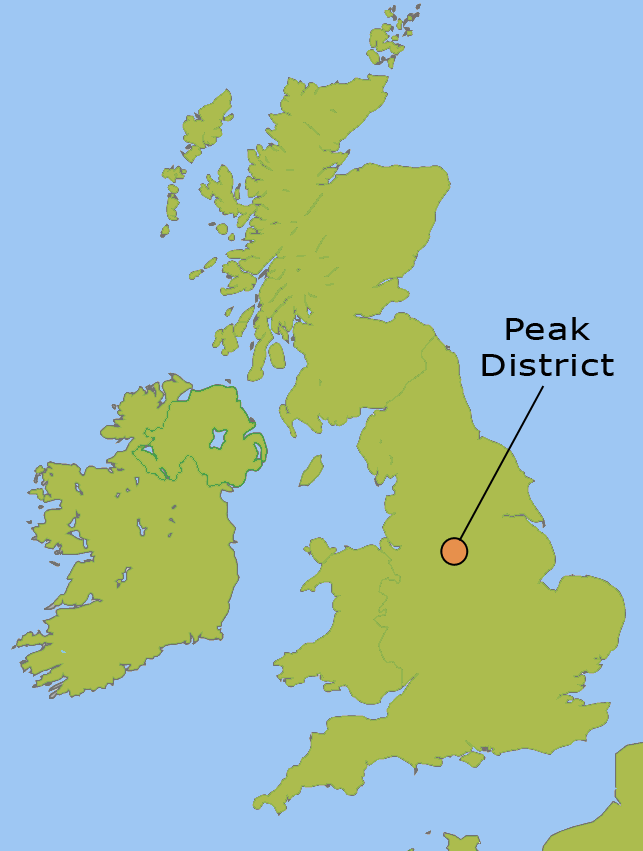 I know very little about the Peak District, please tell me more

Recently I arranged a tour for my friend Pat, from New York. Pat commented that most people who aren’t from Great Britain don’t know a great deal about the Peak District and kindly wrote the following piece for me, which helps to describe the Peak District to someone who isn’t familiar with the area.

The Peak District is an oval-shaped oasis of lush hills and mountains just 15 miles east of Manchester. In 1951 this region of the Pennine Mountains was designated as England’s first national park, and it now offers some of the country’s finest cycling and hiking opportunities.

Its scenery is striking for its beauty and variety, while its settlements are memorable for their traditional appearance. The rolling terrain, streams, forests and moors recall sections of West Virginia and Vermont, while the stone cottages in the hamlets as well as the nearby sheep meadows enclosed by low stone walls maintain a picturesque English landscape largely ravaged elsewhere over the past two centuries. A few sites within the area were chosen by nobility in the Baroque or Victorian era to house their gracious stately homes and gardens.

Whether cycling or hiking or combining the two, Peak Tours will put you on quiet and beautiful pathways suited to your needs for reflection, relaxation, ambling, or physical challenge, far from the frenzy of urbanized England yet always comfortably close to a pub with a genial atmosphere, great beers, and a fine, diverse menu.